Jennifer Hadley (USA) with their picture Not so cat-like reflexes
“This 3 month old cub and his sibling were in a tree. The other lionesses were in other trees and on the ground. He wanted to get down and walked all over the branches looking for the right spot and finally just went for it. It was probably his first time in a tree and his descent didn't go so well. He was just fine though after landing on the ground. He got up and ran off with some other cubs.” 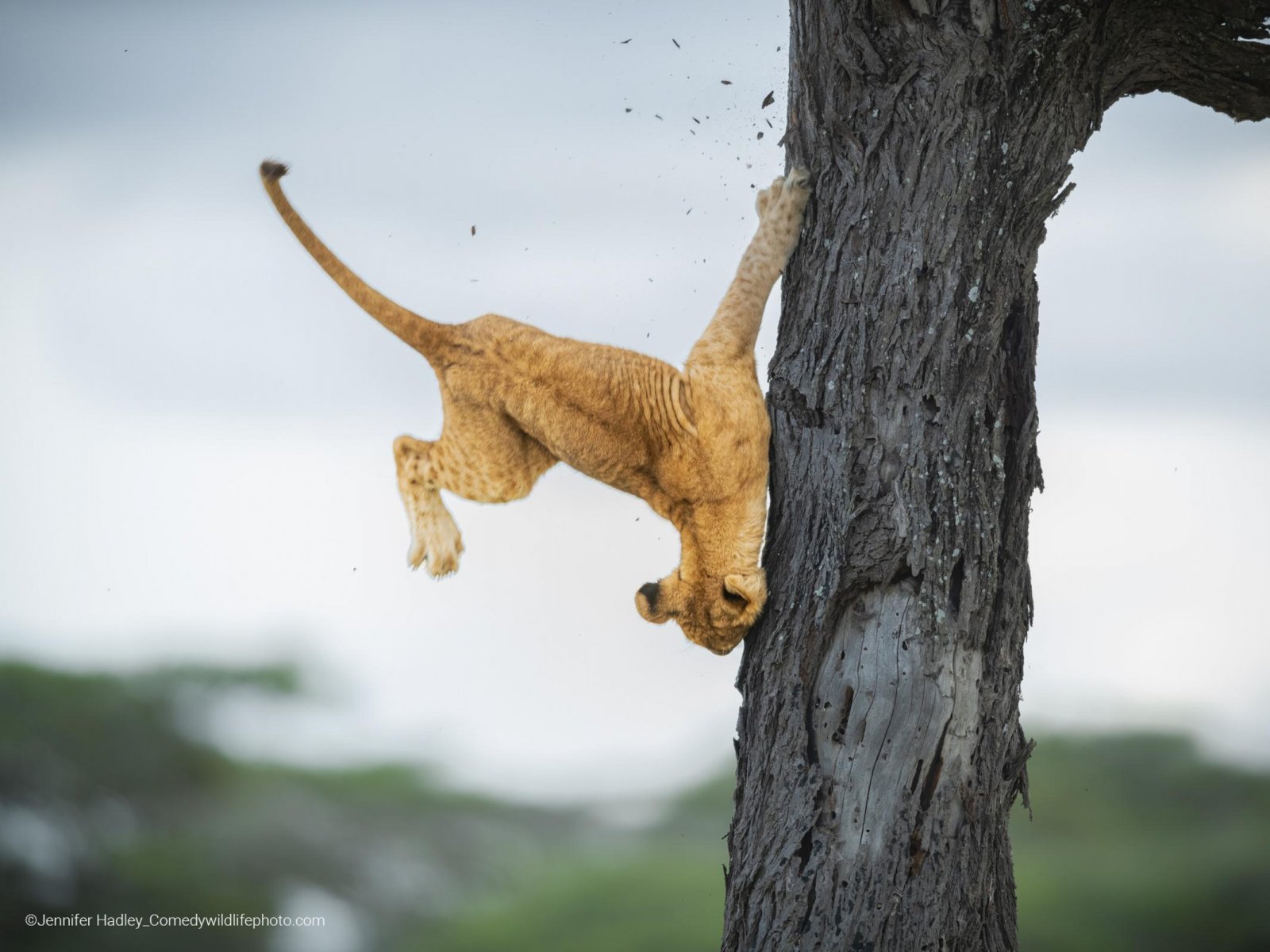 Alex Walker’s Serian Creatures of the Land Award
Jennifer Hadley (USA) with their picture Not so cat-like reflexes
“This 3 month old cub and his sibling were in a tree. The other lionesses were in other trees and on the ground. He wanted to get down and walked all over the branches looking for the right spot and finally just went for it. It was probably his first time in a tree and his descent didn't go so well. He was just fine though after landing on the ground. He got up and ran off with some other cubs.” 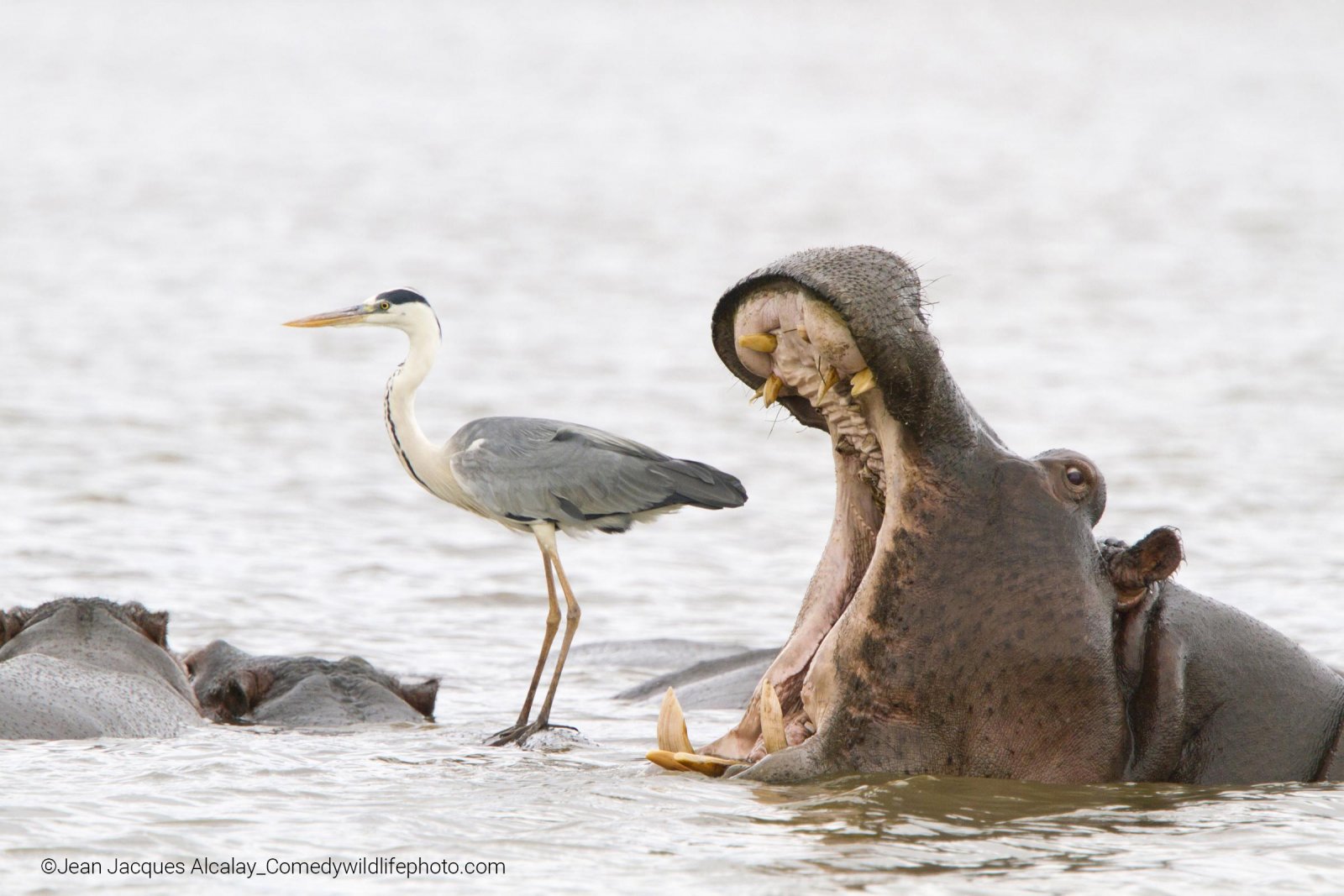 Creatures Under the Sea Award
Arturo Telle Thiemann (Spanish) with their picture Say cheeeese
“A couple of triggerfish looking into the camera, captured at the Azores.Even they may look funny, these fish can be quite aggressive. In this case they didn't attempt to bite me, but the domeport of my camera housing ended up with some scratches... life is hard... at least it wasn't me who was hurt” 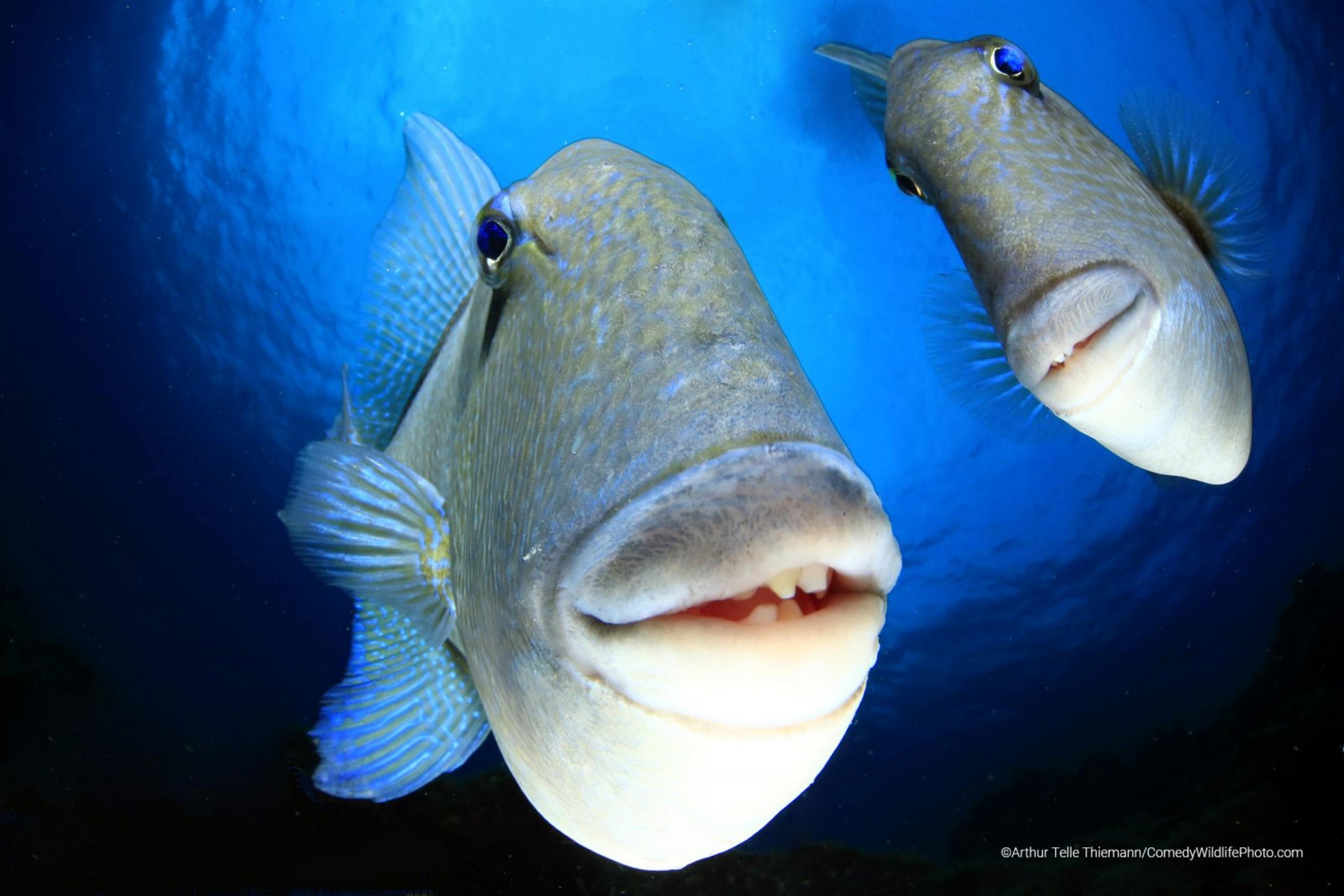 Affinity Photo 2 People's Choice Award
Jennifer Hadley (USA) with their picture Talk To The Fin!
“This was shot on the Falkland Islands. These two gentoo penguins were hanging out on the beach when one shook himself off and gave his mate the snub.” 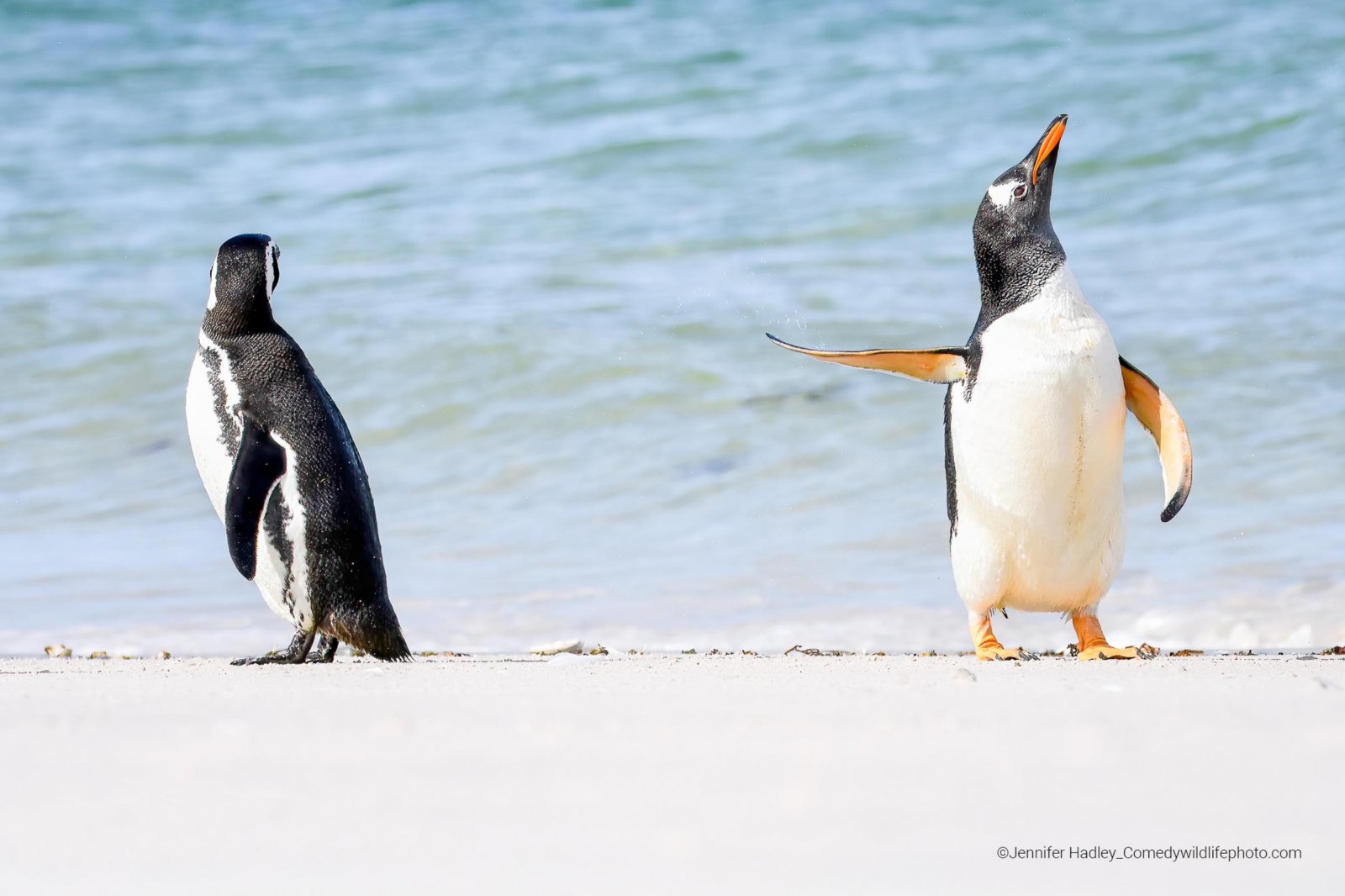 Junior Award
Arshdeep Singh (Indian) with their picture I CU boy !
“Few hundred miles away we went to explore wildlife of a small town named ‘Bikaner’. It was after almost a year I travelled because of covid. We hired a guide to explore places around. During last day of our trip we came across a pipe in a city where we spotted an owlet. I have earlier clicked owls in a pipe before so I was sure that I wasn’t mistake. We waited for a short while and it didn’t take a long time and one of the spotted owlet came out of the pipe. It was really funny when he came out and looked at me straight, before going inside he closed one of his eyes and felt like he wanted to say I CU boy ! and I immediately snapped a picture when he gave this pose.” 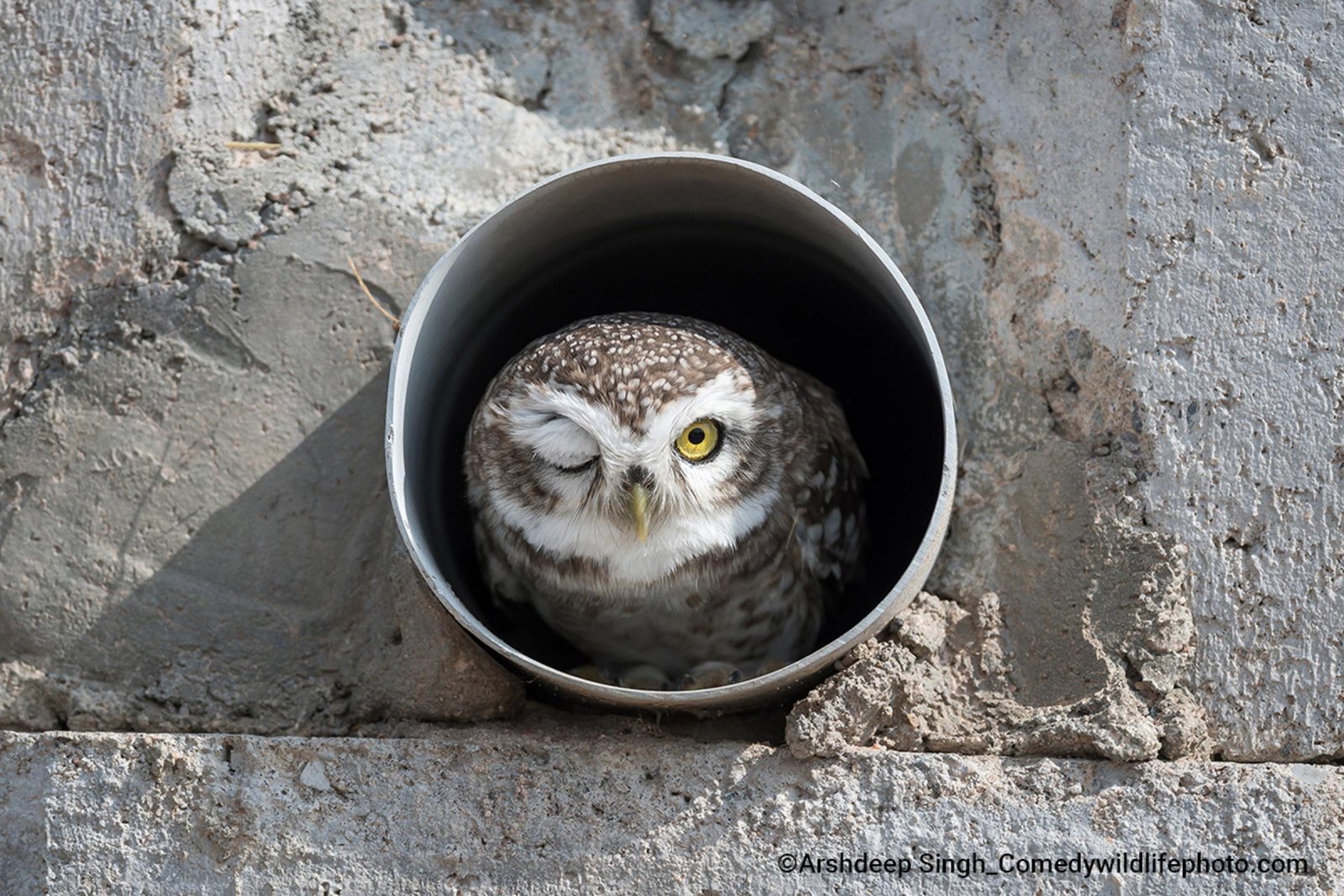 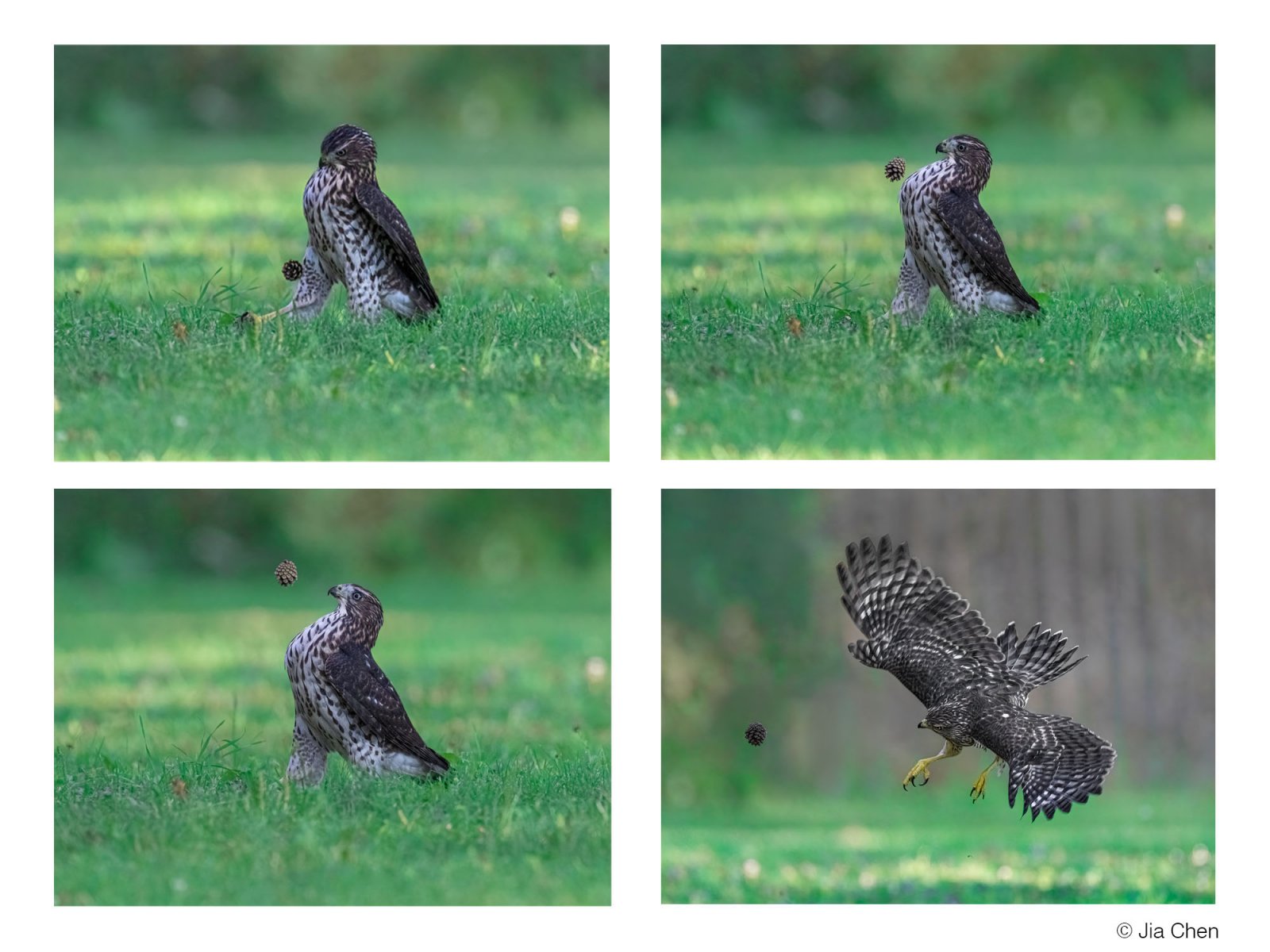 Michael Eastwell (British) with their picture It's all kicking off!
“Apart from its beauty, Cape Hillsborough is renowned for its resident kangaroos and wallabies. I visited the area for three consecutive sunrises, but it was on my final morning that I captured this beautiful spectacle, two wallabies playing / fighting on the beach as the sun burst through the surrounding clouds.” 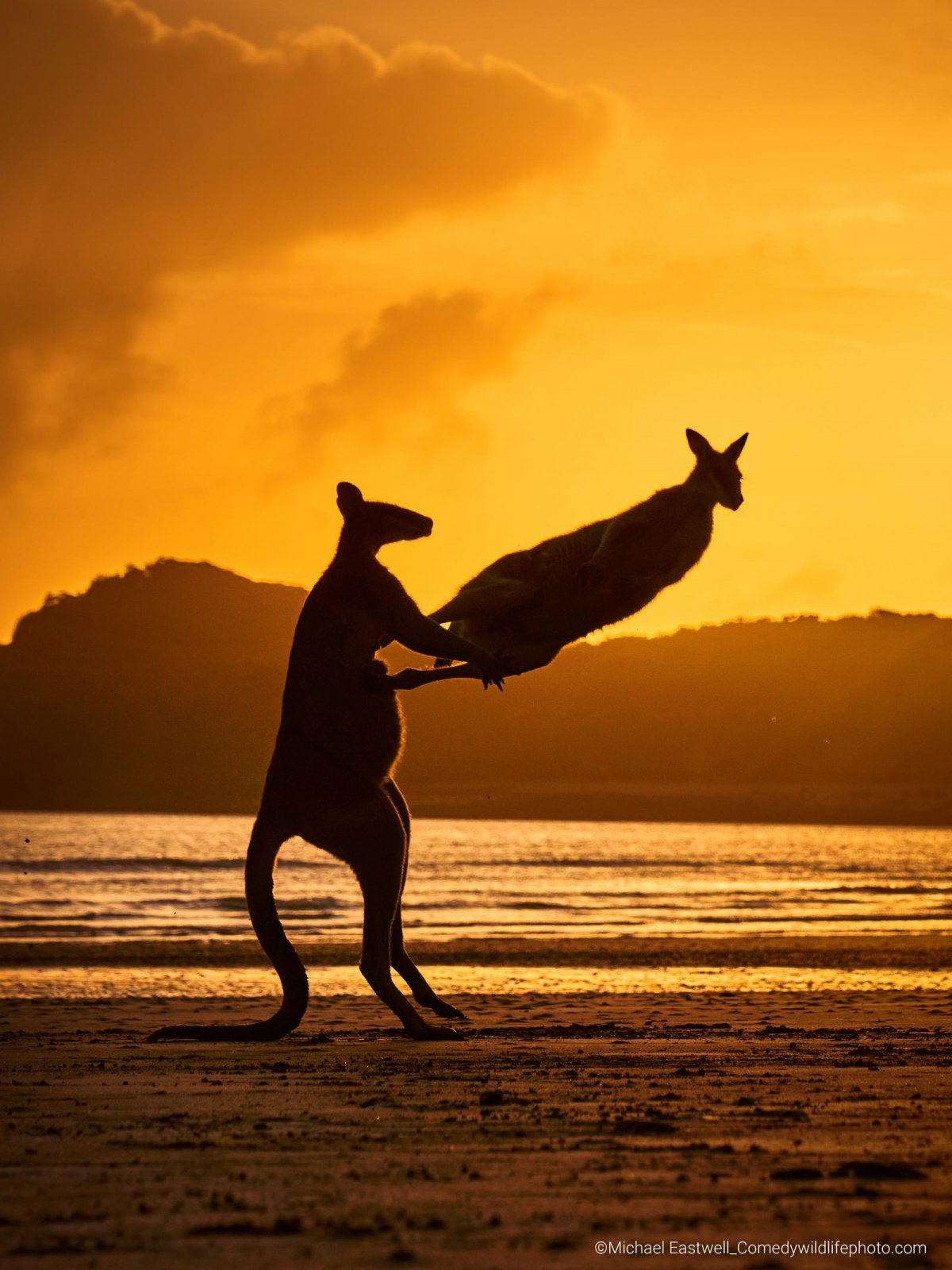 Miroslav Srb. (Czech Republic) with their picture Hello everyone
“I photographed raccoon on a Florida beach, where I fed him shrimps. Then he thanked me like that.” 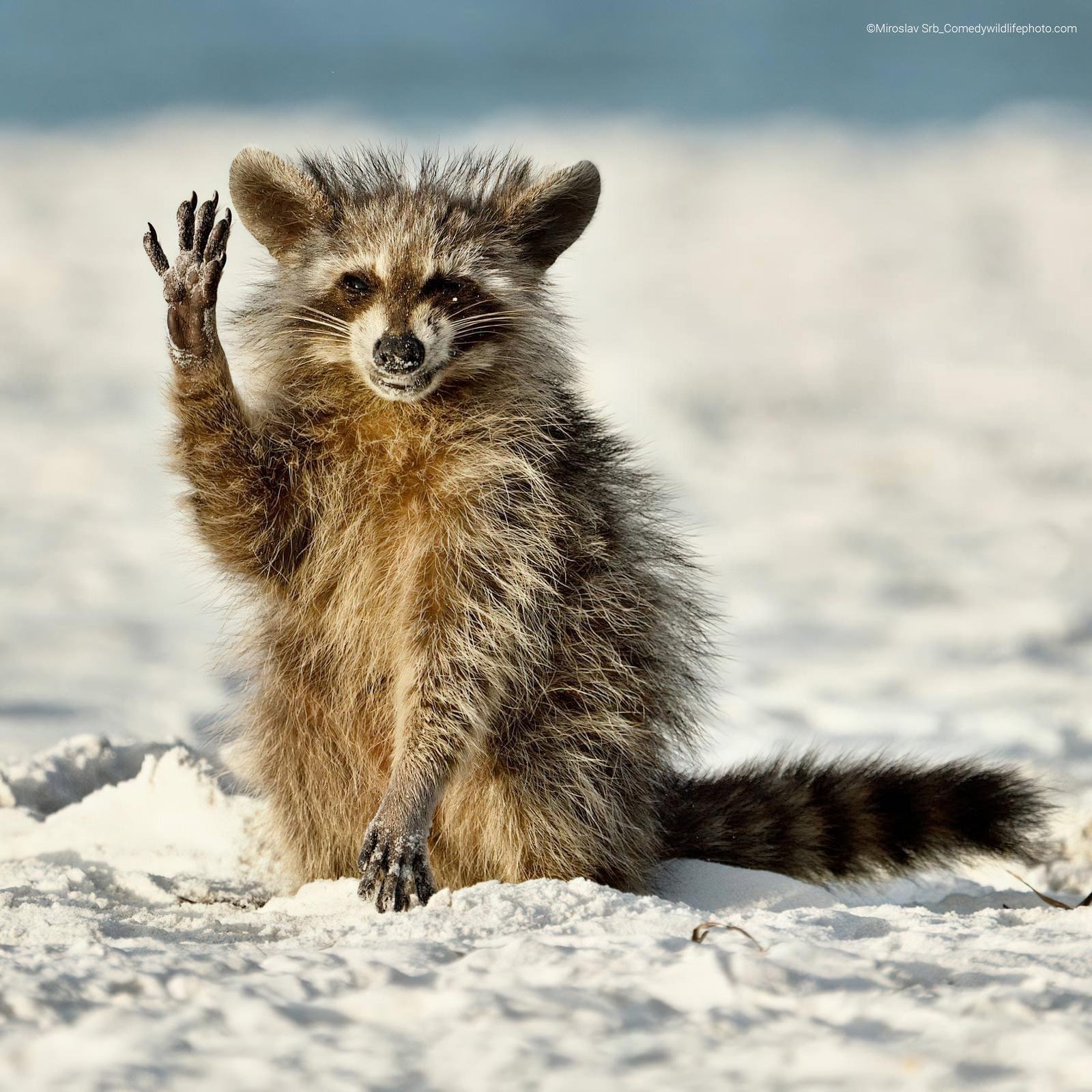 Federica Vinci (Italian) with their picture Monkey Wellness Centre
“Walking near a cambodian temple where groups of wild monkeys lived, I came across this scene: a wild monkey in total relax, while its friend was taking care of it.” 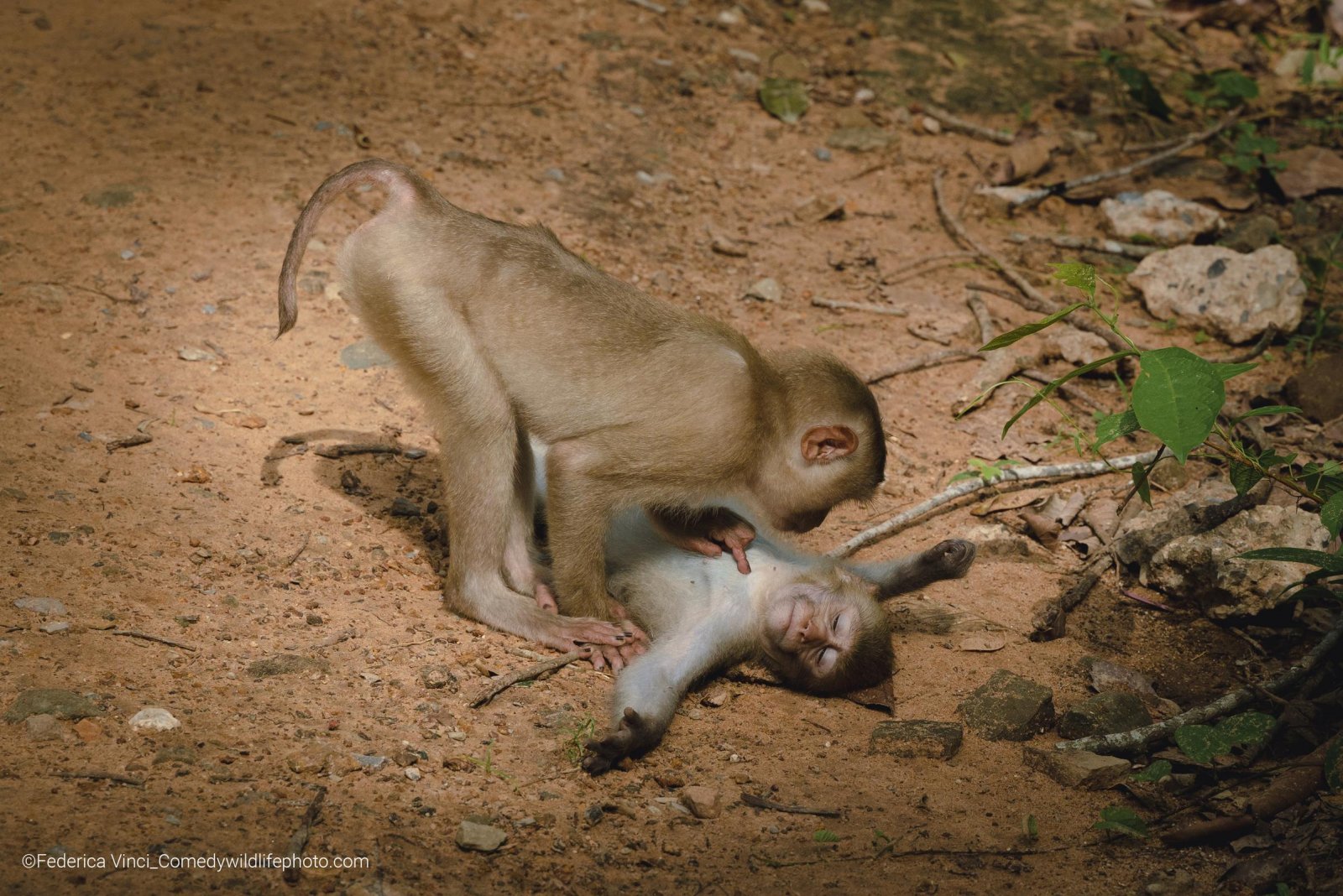 Jagdeep Rajput. (Indian) with their picture Pegasus, the flying horse.
“Actually this is Indian Saras Crane attacking a Bluebull from behind, the bull happened to venture close to Saras's nest, where in, it had laid a single egg. The Saras Crane, which is tallest flying bird in the world, opened it's huge wings and attacked the bull from behind, driving the bull away from the nest” 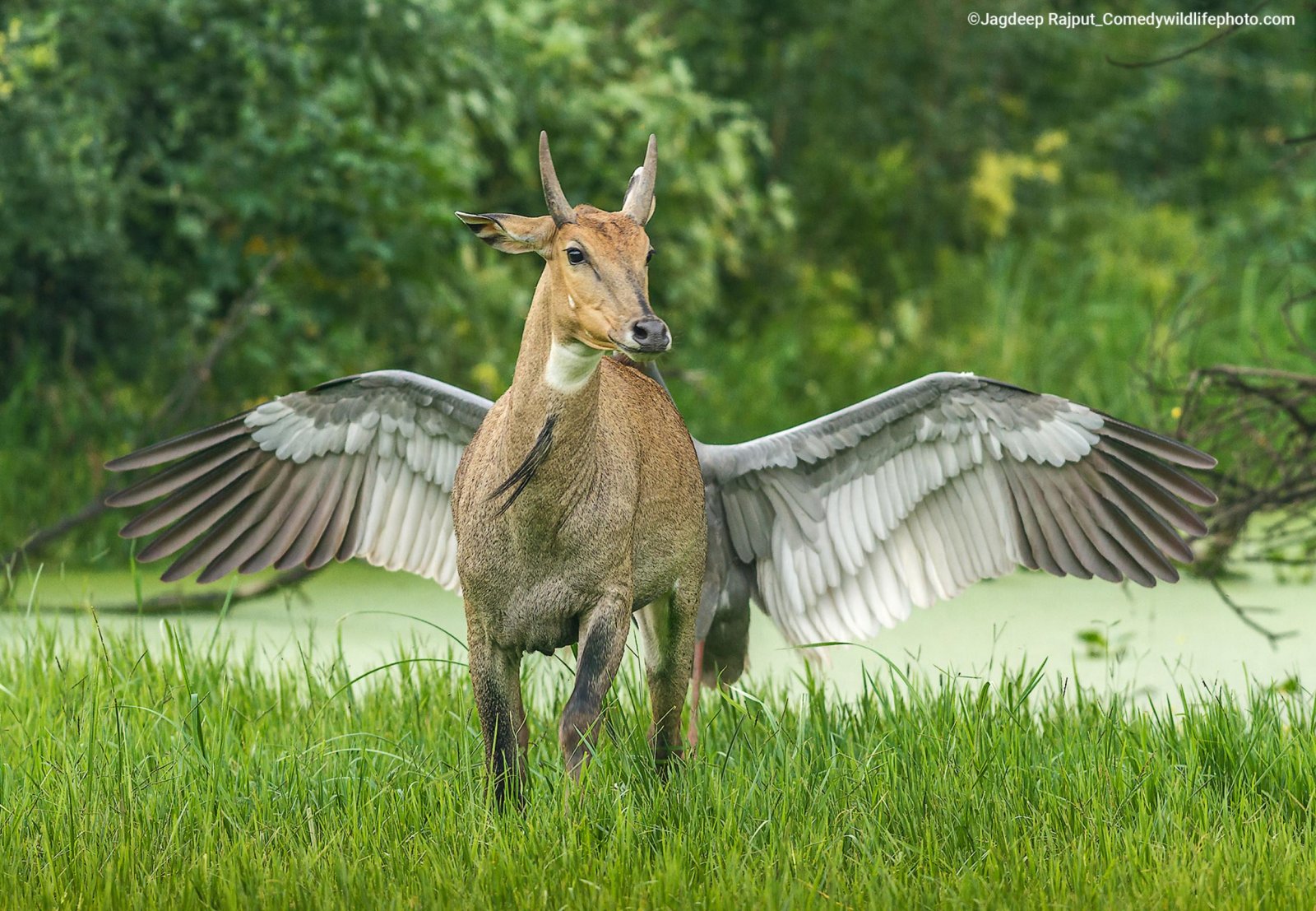 Emmanuel Do Linh San (South African) with their picture I'm gonna strangle you!
“I was following a group of meerkats on foot in the Kalahari Trails Game Reserve, in South Africa. Most individuals, including adults, were in a playful mood. It gave me a unique opportunity to capture very interesting and dynamic interactions between some members of the group. In the photo that I have selected, there is no aggression between individuals, but rather an interaction that reminds us of humans when one of your friends jokes about you and you pretend to strangle them and, in response, they open their mouth like a simpleton :-)”

Ryan Sims (USA) with their picture Excuse Me... Pardon Me!
“A duckling walking/waddling across a turtle covered log at the Juanita wetlands, the duckling fell off after a few turtle crossings, it was cute.” 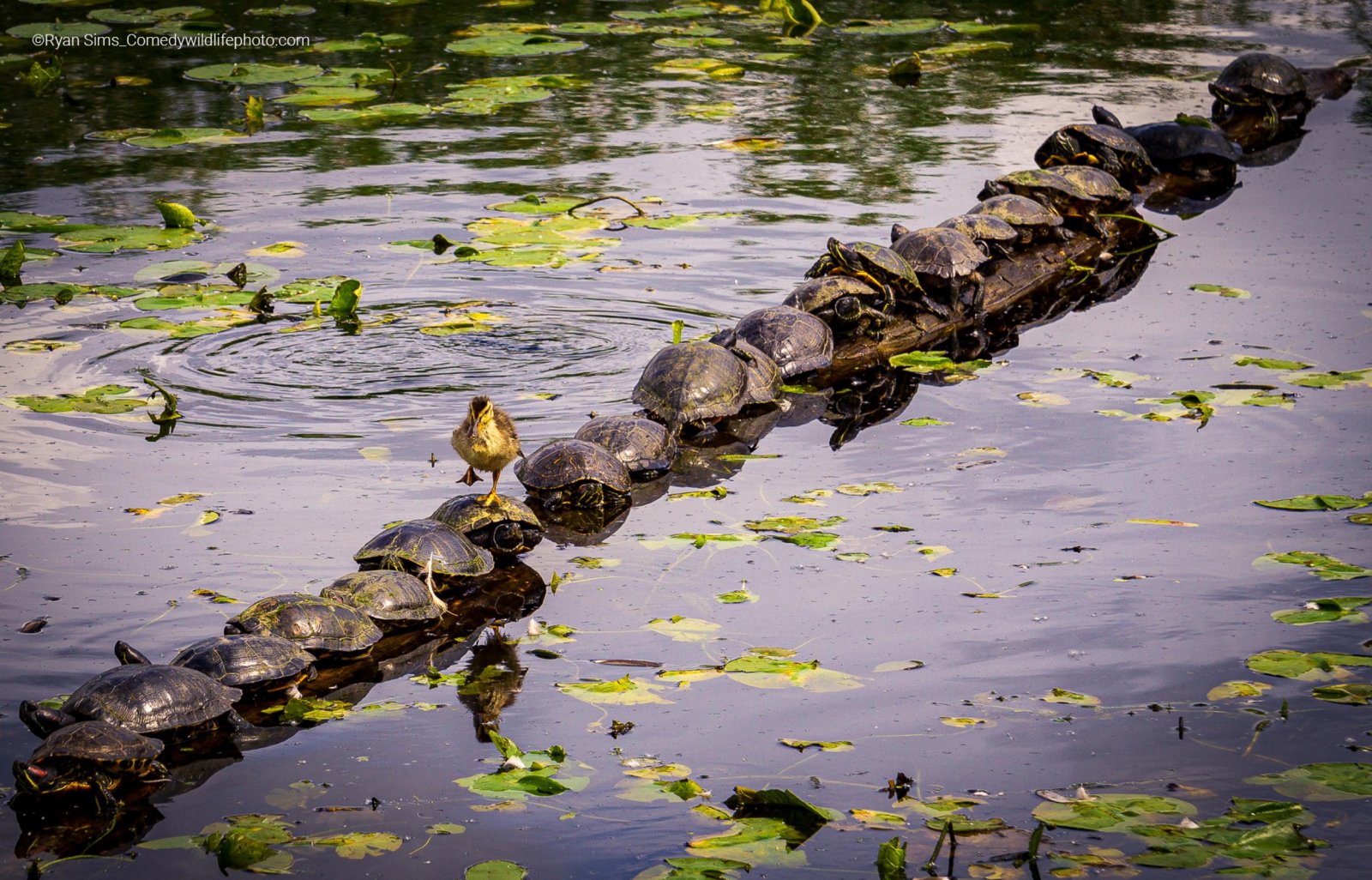 Alex Pansier (Dutch) with their picture Jumping Jack
“A red squirrel jumps during a rainstorm, so you can see the drops flying around.” 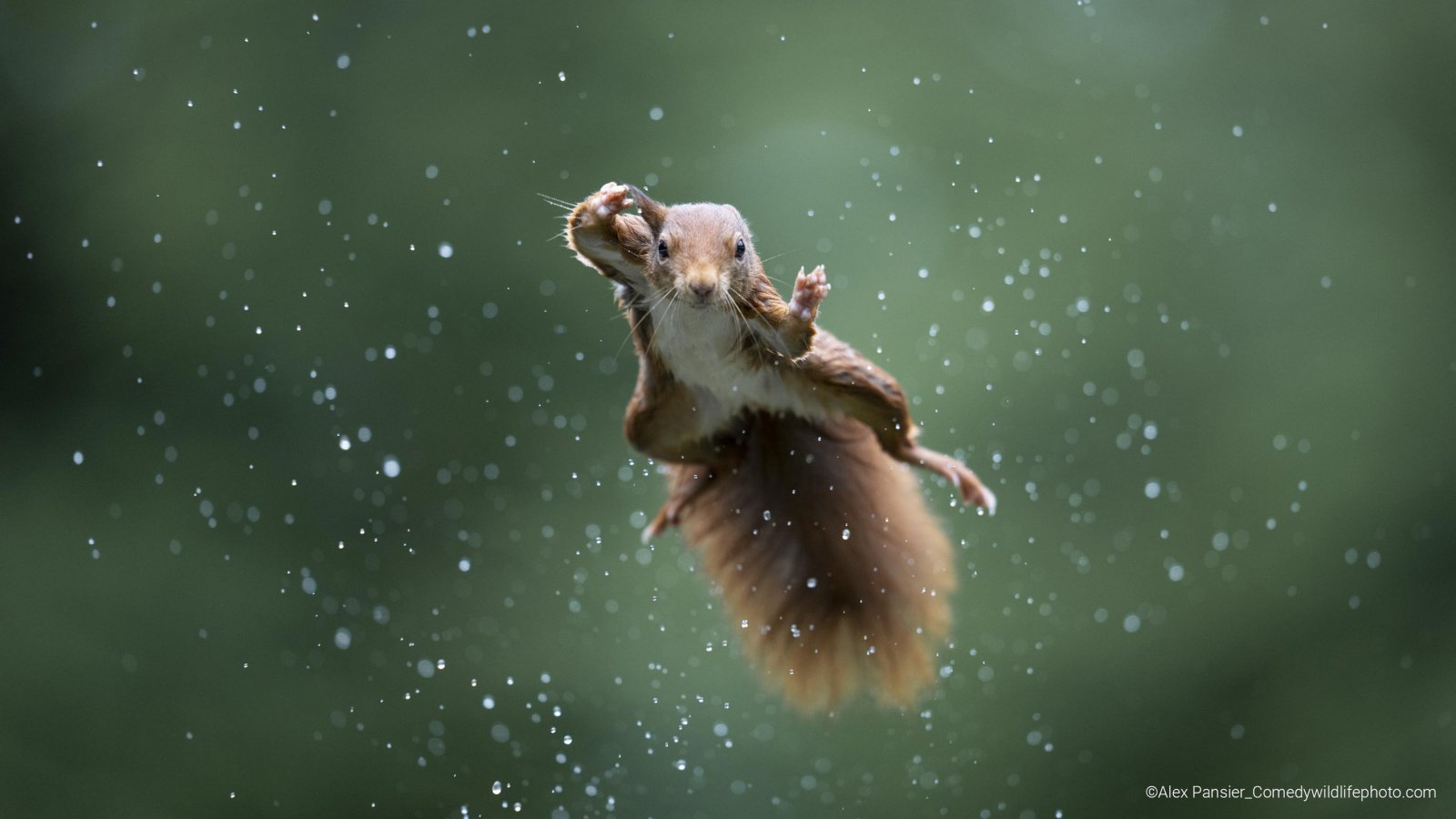 Mark Schocken (USA) with their picture Tight Fit!
“I was going to see and photograph this eastern screech owl nest in a local park in Florida. One morning, a few days before the two owlets fledged, one owlet tried to squeeze into the nest hole with Mom, maybe to see the outside world for the first time. It was hilarious and I was glad I was there that morning to photograph it. The moment lasted only a few seconds as Mom didn't seem very happy with the arrangement. Check out the expression on her face.” 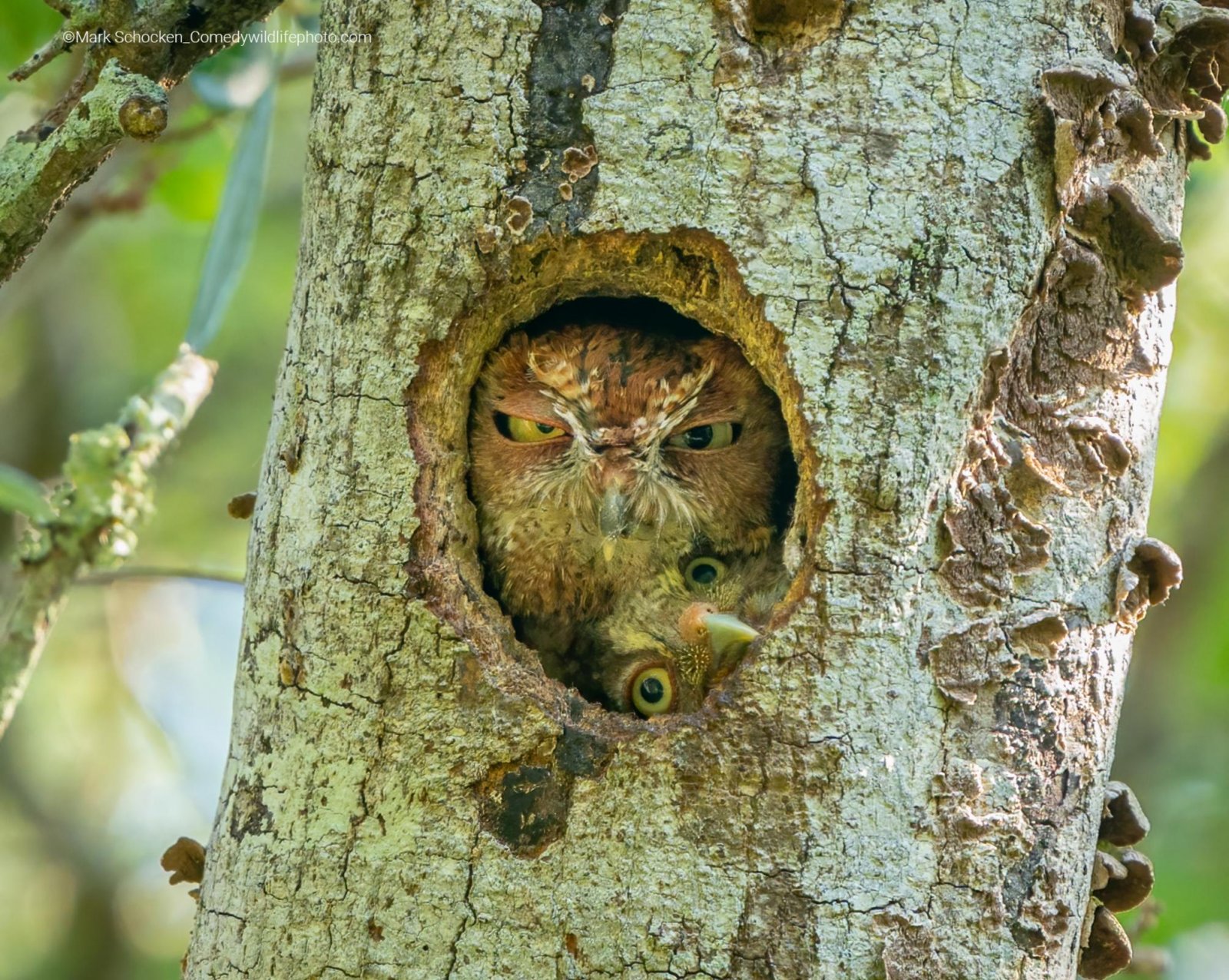 John Chaney (USA) with their picture Fight Back
“This salmon decide to punch the bear in the face rather than be lunch.” 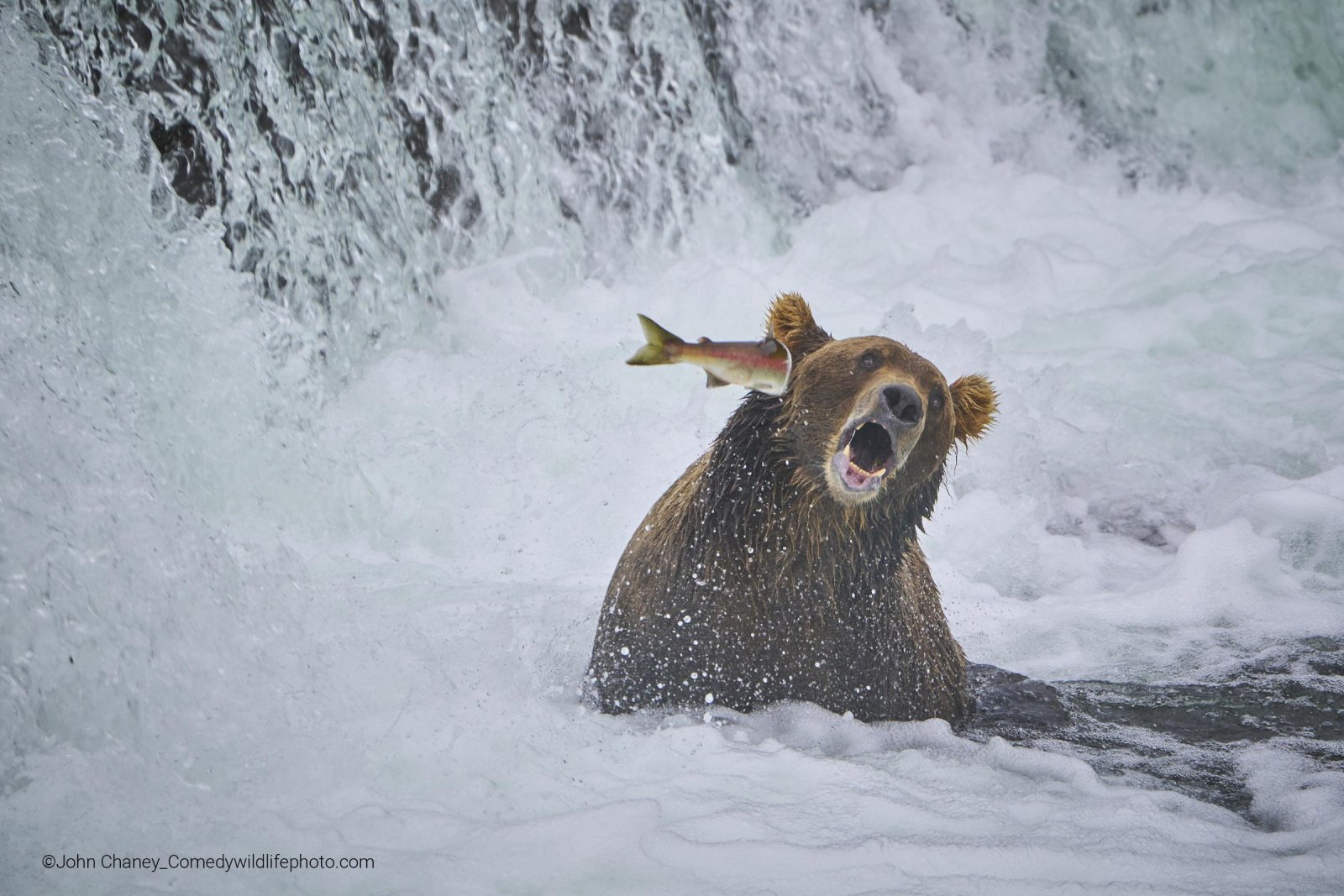 Martin Grace (British) with their picture Keep Calm and keep your head
“Two King Penguins (Aptenodytes patagonicus) at Volunteer Point in the Falklands. The right hand bird may have an inscrutable expression but it must be wondering where its mate's head has gone. Perhaps it is a Rudyard Kipling scholar: 'If you can keep your head when all about you. Are losing theirs and blaming it on you ...” 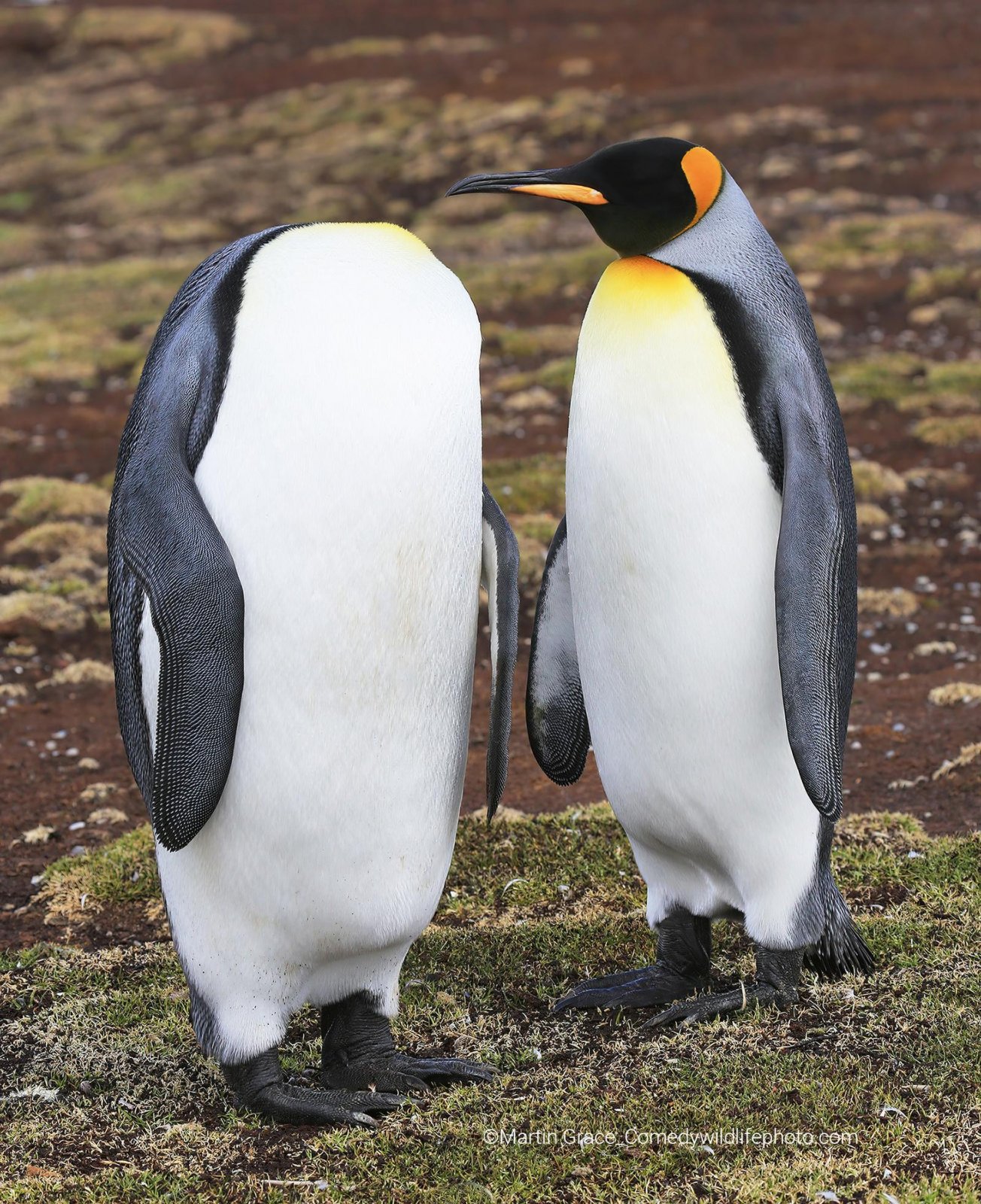